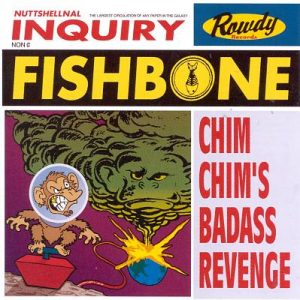 Produced by Dallas Austin and Fishbone

We have arrived at Fishbone’s “Angry at The Music Industry” record, a decades-old blueprint for albums but a serviceable one. This is the cliche that, at its best, produces Pink Floyd’s Wish you Were Here, Joni Mitchell’s For The Roses and Prince’s Emancipation. On the other end, bargain versions of what a band actually does well : Nirvana’s “Rape Me” feels like the leftovers from “Francis Farmer Will Have its Revenge on Seattle” and “EMI” by the Sex Pistols resembles the seventh single you release from a hit album when you’ve already bleed the rest of it dry.

How then to give to the music industry right between the eyes while sounding like yourself not a spoiled child version of yourself? How to not let your fury be the only thing that matters and the only thing we hear? The answer might be, but probably isn’t, an album about bodily fluids and flaccid dangly parts.

The story so far:  Fishbone’s 4th album Give a Monkey a Brain tanked while the band was also going through a ton of personnel turnover and resulted on Sony Music dropping the band entirely. Would this have happened if Fishbone had been say, The Red Hot Chili Peppers, whom they mentored and inspired? No. But anyway…

Chim Chim happened in partnership with producer Dallas Austin (who wrote the majority of the songs on Boyz II Men’s debut album) whose label Rowdy Records had a distribution deal with Arista. Apparently this is a “concept album” (I don’t hear this at all) about the monkey spoken of on the previous record coming for galactic vengeance. All racial overtones of a black bands seeing themselves as avenging monkeys present and accounted for and Austin is on record as saying he wanted to make Fishbone’s heaviest record yet.

He didn’t do that. Instead, I’d say he created Fishbone’s funniest and whiplashiest record yet.

Of course it’s hilarious (Fishbone could do hilarious with an album of room tone). It’s also part of a great LA black humor tradition that blends genre fiction, afro-futurism and doing-the-dozens smackdowns (Fishbone’s records are the siblings of the novels of Walter Mosley and Paul Beatty and the full enterprise of Tyler the Creator). But c’mon now: We’re 5 albums and nearly 20 years in. And Fishbone decided that their power slam of the music industry that treated them like field hands is…a record about beer guts and taking a shit?

Unsurprisingly, “Chim Chim’s” best songs are not “Beer Gut” or “In the Cube” (slang for the restroom) but tracks that avoid this dumb idea entirely. The slap-backslap of “Psychologically Overcast” (Track 6, featuring Busta Rhymes) and “Alcoholic” (Track 7 about lead singer Angelo Moore) is as fierce as a hungry lioness. The title track sets us listeners is a heavy metal jam with a funk bass and marching band percussion that is actually more fun then that sounds on its face. The interlude monologues remind us, repeatedly, what can be great about hip-hop album interstitial sketches and I’ve even got love for “Monkey Dick” at track 11, which is essentially a ska-jam about a sexually frustrated zoo animal.

But c’mon now. 4 more songs about dicks and butts after that? Most of them over 7 minutes long?  Bearing your teeth at an industry that did you dirty with an album of pit humor? This is high school band shit and not on Fishbone’s level. Not at this point. Maybe not ever. And really not funny, the greatest crime of all.

You don’t need to own this one. You need to download tracks 2,6,7 and 11 and remind yourself that Fishbone’s real revenge was being great before anyone noticed, releasing three flawless albums in their 20s and still being influential now. Despite often having ideas that resemble taking a crap on their own career and future.