Listening to all of Rush’s Albums to honor Neil Peart: Caress of Steel 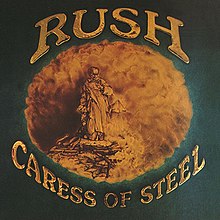 Rush’s third studio album was considered a bomb, a claim not without merit: The first side contains some of their finest songwriting in a pair of tracks — “Bastille Day “ and “Lakeside Park”— that manage to be as grand and epic as their 12 minute outer space operas while feeling human and made of flesh rather than make of titanium and being a song you appreciate the audacity of rather than actually, eh listen to.

A bit of context here: The typical narrative of Rush is these 12 minute three movement dramas about based on JRR Tolkein and Ayn Rand are them at their best. Then around “Tom Sawyer” (1980, eight albums into their career) they got a taste of having a 3 minute hit song and never went back. In effect they “sold out” and turned their back on the nerds who supported them from the jump.

My relationship with them is just the opposite. I’ve no need for 12 minutes of something called “Cygnus Book II” because I discovered the band in their 3 minute song years of the 1980s and that’s what I fell in love with so that works for me.

Here then, side one of Caress of Steel is what they would become in another 5 years. Side two is where they were at the moment. It’s an uneasy coexistence and the album is so bottom heavy with three movement wankarama dramas that the (better) first side feels tacked on.

Ah well. I never owned this record and heard all I needed from it when I bought the Rush: Chronicles greatest compilation on something called a “CD” once upon a time. Nothing lost.

Best drumming: That opening from Bastille Day is killer:

“Midway hawkers calling “Try your luck with me”
Merry-go-round wheezing the same old melody
A thousand ten cent wonders who could ask for more
A pocketful of silver, the key to heaven’s door”

A surprisingly sweet track about an amusement park Neil Peart worked at as a teenager in St. Catherine’s, Ontario, a suburb of Toronto. I am always pleased when a Rush song is about people and this world we share together.