Tag: being the ricardos 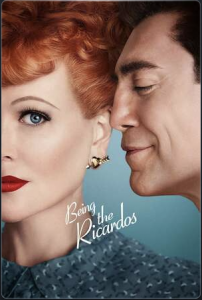 Aaron Sorkin’s gonna Aaron Sorkin. Meaning there’s great dialogue in this movie, it’s brilliantly acted and a lot of the big speeches mean less than they originally seem to. But Nicole Kidman and Javier Bardem knock it out as Lucille Ball and Desi Arnaz on a fateful week of their career when the Lucy Show is threatened with cancellation.

You’ll obviously enjoy this more if you are fan of vintage television and mid-century America. If you aren’t its still a great movie about how hard it is to work with someone you are also married to/involved with/releated to. Frankly I don’t know how say, The Coen Brothers or Beyonce and Jay Z do it.