Fishbone Listen Through: Album 7 of 7 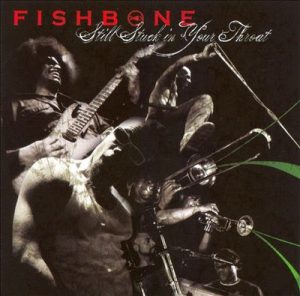 This is Fishbone’s party record. It whirls, dip-dives, then bum rushes the garage door and spills out on the street under a pulsing moon. We could argue that all Fishbone records are party records (despite also being genre experiments, satire and social commentary) just as all John Waters movies are black comedies despite doing a lot of other things too. But Still Stuck is their purest example of a record you throw on not to get the night going but to keep it at its peak.

Why does it feel so perfectly Fishbone to throw out your best party record in your 40s rather than late teens? Maybe because a band made up equally of manic energy, pinpoint musicianship and innovative spirit plagued by terrible career choices could only do it this way: The sweatiest, danciest record of their career comes at the moment in life when limbs start to hurt and we consider going to bed before the joint gets jumping.

12 songs. The opener “Jackass Brigade” donkey-kicks you out of your chair (horse noises on the backing track and all) then scrambles to a summit almost immediately. Tracks 3-7— “Skank’n Go Nutz” to “The Devil made him do It” are a high wind of furious funk and mighty horns. Stop moving and the songs might exhale you right over a twisted ankle. The album then catches its breath for just a sec, whirls about and kicks out the garage door with “Premadawnutt” in position number 10. By the moment of the final track, a damn funny song called “Date Rape” about a sexual felon getting his just desserts, you’re already on the sidewalk gasping for air. You’d chuckle if you had any lung left for it.

Still Stuck in the Throat is both a play on Fishbone’s name and the fact that, although they only recorded about once a decade now and only Angelo Moore (lead singer) and John Norwood Fisher (bass) remained from the original lineup, Fishbone never stopped touring the world, playing together and in support their friends. More than that, I like how the title of this album describes both the pain and joy of being a Fishbone fan: These artists sabotaged their own career more than once and had a bad habit of valuing funny over good. These are forgivable errors when compared to the sheer chops, verve and boundless drive to challenge themselves they showed as players and the far more successful bands (No Doubt, The Red Hot Chili Peppers, Primus) that looked up to them. And these errors would have cost less, I have to believe, had Fishbone been a band full of handsome white people.

Still Stuck in our Throat is where they should be. As a reminder that great bands don’t always make great choices or have great luck. In a perfect world, that shouldn’t matter. The genius of their music should be our reminder, persistent, even annoying, they count too. The phrase “brought the funk to the punk” is overused when describing Fishbone’s influence. But can you really apply it, with anything like a full heart, to anyone else?

Is it time for the Fishbone biopic to get them back into the conversation? How about a Rock and Roll Hall of Fame nomination? Cuz I’d be down for both.