Listening Through all of Fishbone’s Albums. Album 1 of 7: “In Your Face” 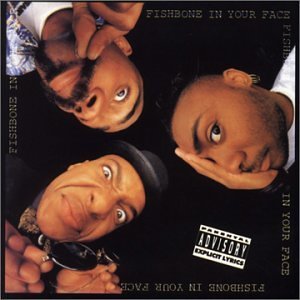 Stand out tracks: “When Problems Arise”, “In the Air”, “Knock it”

Fishbone did not emerge from the aquarium fully formed. The African-American sextet with a hybrid of members from black and brown South Central Los Angeles and the way whiter San Fernando Valley, had been signed to a major label barely out of high school. Yet their debut album, as riotous, fun and groovy as it is, feels like promise and not peak. This might have been a band who had been playing together since about the 9th grade. But while their sound rests completely in each other’s pockets, that sound hadn’t become what we know as Fishbone’s. At least not quite yet.

That sounds like a grievance but it’s not. Fishbone had come up in the Los Angeles punk scene of the day, befriending and later influencing both their contemporaries (The Red Hot Chili Peppers) and a younger generation (No Doubt) with a sound that essentially tossed funk, ska, punk and R&B into a steaming cauldron and got a rich gumbo instead of thin gruel. “LA Punk” usually calls to mind Darby Crash and his older siblings–short, tragic bursts of chaos meant to run you over while soundtracking your pain. But it was never only that. The Chili Peppers borrowed from east coast funk and their hometown’s Latino lowrider and skateboarding culture. X were as interested in country music and Americana (as their later albums would show) as they were in two minutes of fury and guitar distortion. And Los Lobos, a bit older and from the city’s eastern districts formed because they were the few Mexican kids at Garfield High School who liked punk’s elder influences (rockabilly, blues, brill building pop) as much as cumbia and mariachi music.

So LA Punk could be lean and fierce like a yellow line on a highway or wondering through many musical neighborhoods like a boulevard. The overlap between the two was in spirit if not feeling: LA Punk no matter its colors, flavor or highway exit was usually youthful, free and funny. And Fishbone, immediately a boulevard if not a fully paved one (it’s telling that Fishbone has always been a large band of at least 6 members usually dressed identically in jumpsuits,  but only 3 are on the album cover) were always these things: A funky/jumpytwo-tone/ragey/improvised/hilarious thing in your ears that made it pure punk in its soul.

The opening four tracks–“When Problems Arise”, “A Selection”, “Cholly”, and “I Wish That I Had a Date”– are a mad dash through 50s teenage angst with a smartass twinkle in their eye–think Buddy Holly as run with by Biz Markie. The record then slows down (not a wise move for a band like Fishbone, whose strengths lie in their antic energy) but blows through the finish line and past it with “In the Air” at position 7, a bass-forward new wavy midnight jam and a high stepping tribute to casual sex “Knock it.”

It’s these two late tracks that give us an idea of what Fishbone will grow into–satirical, multi-hyphenates who do not see dancing, getting high, getting aware and laughing your ass off as mutually exclusive. That wonder of a mixture around the next bend. Here, in all our faces, is a debut, that works largely as a first chapter of many but is a bang(er) of a start nonetheless.