Fishbone Listen Through: Album 6 of 7: “The Psychotic Friends Nuttwerx” 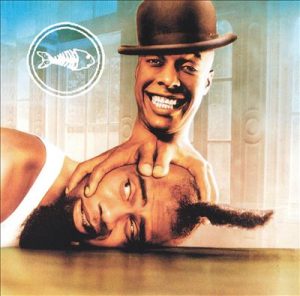 Album 6 of 7: The Psychotic Friends Nuttwerx

Review: Fishbone’s greatest Side 1 at a point in their career when the world told them to give up.

Recorded at The Village (Los Angeles)

Here’s the sad part: For their 6th studio album and their first in nearly 5 years, Fishbone had a brand new deal with Disney’s Hollywood Records in place, the album fucking went nowhere and their new label dropped them immediately. Happy part: The album got great reviews and deserved them. Nearly 20 years into their tenure as a band and at least double that in bad luck and self-destructive tendencies, Fishbone’s best qualities are all up front here: humor, versatility, staying power and bottomless good will: How many bands whose previous two albums tanked, get their heroes (George Clinton), peers (Bad Brains) and admirers (No Doubt, The Red Hot Chili Peppers) to show up and guest star? How many bands take that good will and opportunity then make one of their best records after the universe has told them repeatedly to give up?

The Psychotic Friends Nuttwerx (Fishbone’s album titles get progressively worse. If you own more than one, I suggest color coding or nicknames so you don’t have to remember them) feels grounded in this world and not a phantasm of their own making. Not only will you recognize their bench of guest talent (forgot to mention Ric James and Pink Floyd’s backing vocalists are here too) but Nuttwerx opens with a cover of the Temptations’s “Shakey Ground” and peaks on track 4 with Sly Stone’s “Everybody is a Star,” the first time Fishbone has cited their own inspirations so directly. Reviews praised the bands return to form as ska and reggae-inspired performers but what I hear as much of is the dark bluesy humor of Oakland’s Fantastic Negrito and New Orleans’s Hurray for the Riff Raff: Songs as mordant as they are funny and feel as though the hour is late rather than the party is peaking. As much of this record sits a chair with an eyebrow raised as it spins off its axle into space.

Since you’d basically have to press it yourself to find this record on vinyl, I’m gonna suggest downloading the first side then the last song, “Karma Tsunami.” The second side feels a bit slack and forgettable so perhaps a good time to zone out before the album comes back and smacks you one last time. And if you like records by Chaka Khan and The Pointer Sisters, futuristic yet grounded in at least three African-American musical traditions, “Nuttwerx” is produced by Steve Lindsey who trained at the right-shoulder of Richard Perry, the man behind the boards of Sisters Pointer and Mother Khan and their sonic influence echoes all up and down the channels of this Nuttwerz. So it’s got that going for it as well.