Fishbone Listen Through: Album 4 of 7: “Give a Monkey a Brain and he’ll Swear he’s the Center of the Universe” 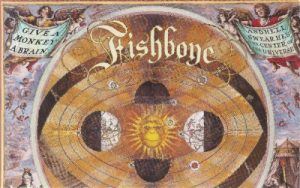 Album 4 of 7: Give a Monkey a Brain and he’ll Swear he’s the Center of the Universe

Review: It’s a great Side B. Skip right to it.

Recorded at One on One Recording. North Hollywood, CA

So this record, Fishbone’s 4th, is a heavy metal record. It’s a super groovy, dancy, low-on-theatrics-high-on-life kinda metal album, but the Fishbone that likes high stepping and horns is sitting this one out. Present instead: A lot of wicked guitar work but feeling smooth like rolling waves rather than jagged and jabbing like thrown glass.

When it works, it works really well. But you pretty much have to play the record in reverse order to get that. Because Side B is prize Fishbone, a seamless grove perfected on Reality of my Surroundings paired with the hilariously cruel social commentary the band’s had from the beginning.

Side A is a shit pile. And 4 of the 5 singles the band released from this record came right out of that mess. Side A sounds like someone kicked Fishbone up out of a deep sleep, yelled “play something different” then recorded while they woke up and remembered how.

Fans, critics and members of the band itself hated Monkey. The success of its predecessor had garnered a spot on the 1993 Lollapaloza Tour but they started that endeavor down their founding guitarist Kendall Jones, who quit immediately following the album’s completion. Right after the tour, keyboardist Chris Dowd split too. Meanwhile the critics beat Monkey until the poor creature lay dead, essentially charging Fishbone with the high crime of trying to be Jane’s Addiction and forgetting how to be Fishbone. Which feels kinda racist to me. Their label, Columbia, dropped them soon afterward, which also feels kinda racist to me.

Monkey (the entire phrase comes from a 1960s schlock religious tract PRINCIPIA DISCORDIA) is a much better album than that. The second side stands up to anything Fishbone had done so far particular the killer double pairings of “Lemon Meringue” and “They All Have Abandoned Their Hopes” (songs 7 and 8) and “No Fear” and “Nut Meglomaniac” which finish up the record at positions 11 and 12. On Side A, you’ve got “Black Flowers” and not much else. But get this record, if you like Fishbone at all, play Side B and think about how many bands of white musicians have tried something new, half-succeeded and been wholly forgiven for it.